Skip to content
Home/Te hī ika: How Māori fishing rights were saved – but only just
Previous Next

Te hī ika: How Māori fishing rights were saved – but only just

Thirty years on from the landmark fisheries settlement – the first ever pan-iwi settlement – Māori interests in fisheries are established and indisputable. But that wasn’t always the case.

You don’t taste it when you’re tucking into a piping-hot battered hoki off a bed of chips and newspaper, gulping down half-shell Bluff oysters, or devouring a helping of toroi at your marae wharekai, but kaimoana has had a tumultuous history.

Māori have been sustainably fishing our waters for hundreds of years. A vital food source, kaimoana was divided among hapū and whānau, and traded and gifted between iwi. “We were trading fish long before Pākehā came,” says Māori studies professor and Ngāti Kahu leader Margaret Mutu. Like so many others, her northern, coastal hapū Te Whānau Moana “have always relied on fishing”.

There are intricate traditions tied up with gathering kaimoana for tangata whenua. Mātauranga around designated fishing grounds and fishing techniques were passed down through generations. Rāhui are put in place to protect certain species or fishing areas from being overfished. Māori have always collectively owned and looked after fisheries in Aotearoa.

During the 19th century, settlers began applying harsh European fishing methods to our moana, awa, roto and puna. It didn’t take long for kaimoana stocks to start feeling the strain; these start-ups had no knowledge of the fisheries they were swiftly exhausting. The Oyster Fisheries Act of 1866 and the Fish Protection Act of 1877 were the first of a slew of laws and regulations imposed by the government to address the pressure on fisheries. 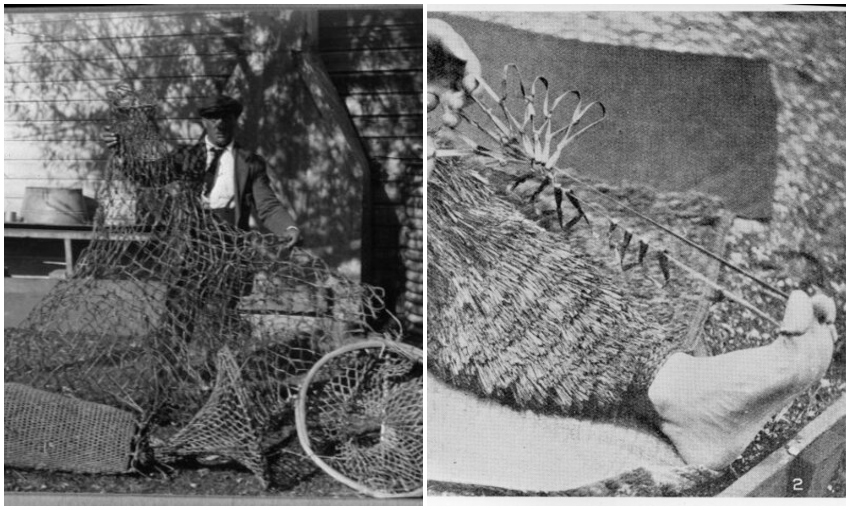 By the end of the 19th century, Māori were banned from the commercial harvesting of kaimoana: excluded from a commodity that had sustained us for centuries.

Then, almost a century later, in 1986, the most extensive government response to managing fish stocks was established. The Quota Management System (QMS) established limits to the amount of fish that could be caught, and allocated quota rights to fishers based on catch history. Anything remaining was effectively sold to the highest bidder.

By this point, Māori had been dispossessed of access to fisheries through depletion of stocks, environmental degradation, over a century of government legislation and now the QMS. Enough was enough, and the issue of Māori fisheries rights was soon to come to a head. In September the following year a group of Muriwhenua iwi took a claim to the Waitangi Tribunal that the QMS was in direct conflict with the Treaty of Waitangi.

The tribunal found that while the QMS held distinct advantages for the environment and was in fact an innovative system, the allocation of rights had neglected to include Māori. The system was “in fundamental conflict with the Treaty’s principles and terms”. The full, exclusive and undisturbed possession of the property right to fishing guaranteed to Māori under the Treaty had been unlawfully dished out to non-Māori.

It was a significant decision. Importantly, it established a property right in fisheries for Māori – one that was eternal – while ruling that the non-Māori commercial fishing that had been going on for years interfered with Māori fishing rights.

It was found that new agreements needed to be made between the Crown and Māori if fishing was to continue and so that the QMS could be introduced in a way that would comply with the Treaty. In the same year, the High Court upheld the tribunal’s finding that there was a Māori property right to fisheries and granted an injunction on further implementation of the QMS pending settlement of the claims.

During a buzzing age of Māori activism, the ruling opened the way for successful Māori challenges to the allocation of fishing quota.

In 1989 the Maori Fisheries Act was passed and the Māori Fisheries Commission established as part of the remedy flowing from the High Court’s findings. Whaimutu Dewes, who was appointed to that original commission, says their job was to “take that interim settlement and work it through to a point where it could be a complete settlement which would endure over time”.

The commission was handed the thorny task of figuring out how to distribute among Māori a 10% fishing quota transferred from the Crown, and managing $10 million on behalf of all Māori.

As negotiations continued, it became evident that other interests inherent in Treaty provisions and Māori fishing history would require further negotiations with the Crown. This culminated in the full and final settlement of commercial claims to fisheries with the 1992 Treaty of Waitangi (Fisheries Claims) Settlement Act.

This involved the government transferring Māori a cash settlement which was used to buy half of fishing giant Sealord and a further 10% of commercial quota shares of any new species brought into the QMS between 1989 and 1992, and 20% after that.

In Dewes’ opinion, the settlement was a big deal because within a Pākehā legal framework “it established beyond a doubt the fact of property rights for Māori communities, and iwi and hapū, and it applied to seafood, to Tangaroa.” He adds that, significantly, “it was indefinite in time – it didn’t have a term on it.”

With the settlement, the government took a step back and left the hardest work to the commission. This was the first ever pan-Māori settlement, for which there was no guidebook. The deed had referred to Māori rather than iwi, and it wasn’t until after the signing that it was agreed allocation to iwi was more appropriate than to individual Māori. Even so, dividing a resource on this scale, among diverse iwi – of which there are over 100 – was unprecedented.

“It was the first time we saw iwi groupings being resourced, even though it was a pretty small amount at the time, and with access to resources to make their own decisions,” says Dewes. And, he adds, “even the ones with the smallest interests have got some form of revenue.” 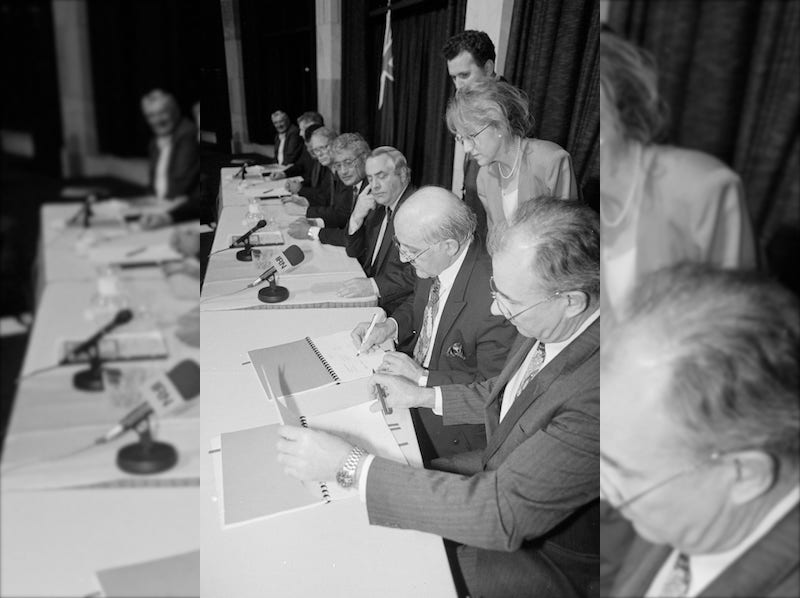 For Mutu, who was chief negotiator of Te Rūnanga a iwi ō Ngāti Kahu, the settlement was a disaster, a “rotten deal”. In her estimation, 50% of the quota (as opposed to the 10% which was offered to Māori at the time) would be a fair amount, considering that Māori initially had full control over Aotearoa’s fisheries.

Mutu characterises the whole settlement process as intentionally disruptive, “soul destroying” and weighted heavily in favour of the Crown, with whom Māori are forced to negotiate on their terms – or else get nothing.

With large-scale seafood operations dominating the market in the decades following the settlement, many independent Māori fishers lost their livelihoods. “A lot of our very capable and highly experienced commercial fishermen were just taken completely out,” Mutu says. The Crown, she says, had created a settlement “so that if we ever went out and tried to sell any of our fish again, we would go to jail”.

The process also split Māori, setting iwi against each other in court for years to come, dividing iwi and hapū members, and taking a toll on kaumātua.

Nearly 30 years later, Mutu says these hurts are still raw. “It wore down our kaumātua, we lost several of them in this process, and it created generational divides within Ngāti Kahu that are not healed now.”

In spite of this pain, Mutu acknowledges the work of Te Ohu Kaimoana, the trust created to manage the final settlement, “who made the best out of what was a rotten deal”.

From this perspective, the settlement was more about survival than success. While it promised to uplift Māori, Mutu says there is no evidence this actually occurred, arguing that the settlement reduced Māori customary fisheries to regulation enforced by the Crown.

“Of course it wasn’t perfect,” Dewes says now. “But it’s pretty hard to see how we could have got a better solution.

But, he adds, “the animosity came from the passion and the commitment. So maybe it was a necessary ingredient.”

For all its faults, the settlement has brought Māori a step closer to the social and economic benefits that we had previously enjoyed through fishing. By empowering iwi to develop fishing enterprises, funds have contributed toward improving health, welfare and education for Māori across the country. Those funds are managed by Te Ohu Kaimoana, the trust that acts as the eyes, ears and mouthpiece for Māori customary and commercial fishing rights.

It’s been a long struggle for Māori to get to this point and to regain some of these rights to fisheries. It has become a stepping stone to some commercial benefits for Māori, who had struggled to participate in commercial fishing because of a lack of access to capital and resources.

The fisheries settlement “didn’t just drop out of space”, says Dewes. Instead, it was part of a much larger movement by Māori around Aotearoa to claim some justice for past wrongdoings by the Crown. The legacy of the settlement represents the hard work and ambition of many people behind the scenes.

That legacy, 30 years since the settlement, is an ongoing assertion of Māori resistance, passion and ambition for the future of our people. “The thing about fishing and seafood is that it was such an integral part of our history,” says Dewes. “I’d like to see it become an integral part of the future as well.”

This content was created in paid partnership with the Spinoff and was written by Spinoff Staff Writer, Charlotte Muru-Lanning (Ngāti Maniapoto, Waikato Tainui).